Buying books in this time of COVID 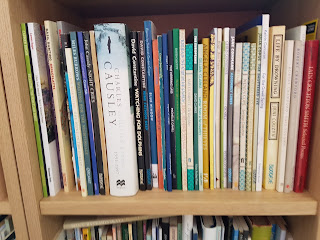 Here in England bookshops have been categorised by the UK government as "non-essential". Some people, myself included, would disagree with that categorisation, but that's how it is. The impact of the categorisation has been that when we were in lockdown physical bookshops had to close, leaving the way open to Amazon.
Now the restrictions have lifted and some (but not all) local bookshops have opened. I know many of you will be heading to your local bookshop to buy your books and in so doing support the shopowner. That is not an option for all of us however. So what else can we do?
In the first instance if you want to help your local bookshop, but can't get there for some reason, you could phone or email them and see if they will supply your books directly to you. That way they get all the profit from the sale. Some bookshops have a website of their own (check Google for details).
My local bookshop has remained closed, due to the owner having to shield a vulnerable family member. Early on in the pandemic I tried to order books from her, but she was unable to supply them. She recommended using Hive https://www.hive.co.uk/  - an online bookstore where you can nominate your local bookshop to receive a minimum 10% if bought online (UK standard postage is free). So I did and have done so several times since. However Hive does not stock everything, only what their wholesaler, Gardners, supplies.
The same is true of Bookshop.org https://bookshop.org, which arrived this year with a great fanfare. With the stated aim of "supporting local bookshops", Bookshop.org offers two ways of supporting bookshops: a) your local bookshop might have a shop page or b) you can nominate your bookshop as you would on Hive. However when I looked at my local bookshop's page, there were only 31 books to choose from. There has been a lot of excitement about this "alternative to Amazon".  But more recently there have been some critical voices, suggesting that this gifthorse needs to have its teeth examined.
Remember neither Bookshop.org nor Hive will supply every book that is published - my collection is not supplied by Gardners and so it is one such book. But you don't just have a choice between the Amazon big bad wolf and Bookshop or Hive.
For many of us Waterstones is our local bookshop and it has an excellent online presence https://www.waterstones.com. I would say that - they stock my book! As does Foyles https://www.foyles.co.uk/.  Blackwells also has an online website https://blackwells.co.uk/bookshop/.
But there are other places to buy books. For starters you could buy from the publisher or the author. This is especially true of the specialist presses and markets, like poetry. You may not be supporting your local bookshop, but you are supporting the people who create the books.
When it comes to online bookshops, if you want to avoid buying from Amazon also avoid Abebooks and Bookdepository as both are owned by the American giant. Books etc. https://www.booksetc.co.uk/ on the otherhand is British and has a huge selection of books both new and old and is nearly always cheaper than Amazon.
There is an online marketplace to rival Amazon: Ebay. You'll usually be dealing with a small bookseller on https://ebay.co.uk, but some of the bigger online booksellers are also there, e.g. World of Books and Wordery. It is always worth looking there, especially if the book you want is hard to find. And yes, my collection is available there - new - from a bookseller who is able to offer it on Ebay in Australia and the US.
These suggestions are just based on my experience of bookhunting. Do you have any alternative suggestions? What about good booksellers outside of the UK? Please add your comments below.
Posted by Zoe Brooks at 06:52 1 comment: 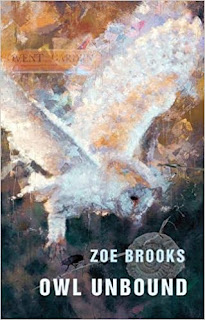 My collection Owl Unbound (pub Indigo Dreams Publishing) was launched on the 23rd October at the Cheltenham Poetry Festival. And I was joined by three very special poet friends - Fiona Sampson, Anna Saunders, and Adam Horovitz. It was a wonderful night.

Now comes the business of selling it! You can buy a copy direct from me for £9.50 (postage is free in the UK) by emailing me on zoe.brooks@googlemail.com. If you want I can sign it for you. Alternatively it is available from my publishers Indigo Dreams or most online bookstores.

The launch reminded me how much I love reading to an audience and I actually quite enjoy reading on Zoom, so if there is anyone interested in my reading at a poetry event, please email me on the above email.

Here it is - the cover of my collection Owl Unbound with Indigo Dreams Publishing. I am really pleased with it. The cover very cleverly references several poems in the collection.

The collection will be published on 1st October with my launch on 23rd October on Zoom (more info to follow). It can be preordered from the publishers here: https://www.indigodreams.co.uk/zoe-brooks/4595048690. or you can order a copy from me (signed if you wish) on zoe.brooks@googlemail.com .

Update on My Forthcoming Collection

The idea that my poetry collection will be published is becoming more and more real. I have sent off the final copy to Indigo Dreams, together with an information sheet about me and the book, and a head and  shoulders shot (how I hate photos of myself).

The launch date is set: 23rd October. It will be a zoom event hosted by Cheltenham Poetry Festival. I will miss the party feel of a physical launch, but as I said in my last post a zoom event has the advantage of allowing me to invite people, such as my friends overseas, who would never get to a physical event. A number of poet friends will be joining me in reading at the launch (details tba), so it won't be unadulterated Zoe!  If you fancy coming, do drop me an email or post a comment below. Or just look out for my posts on twitter, facebook or instagram. Alas you will have to bring your own wine.

Email ThisBlogThis!Share to TwitterShare to FacebookShare to Pinterest
Labels: "a room of her own", Cheltenham Poetry Festival, Indigo Dreams Publishing, launch, poetry

In my last blog post I talked about the impact of COVID and mentioned that I had been attending a number of online poetry events, usually via Zoom. It looks as though my collection will have to be launched online. so I need to understand what works and doesn't. My diary is now full of online poetry events - on some evenings I have as many as three events to choose from and on weekends I could be all day on Zoom overdosing on poetry.

We all thought this would be a temporary phenomenon, but a lot of people have been enjoying poetry online and realising that the internet allow syou to go to poetry events all over the world. I suspect that even when the live events restart (which may be a long way off) the online poetry scene will continue.

Okay there are downsides, but online poetry events do allow you to go round the world, to hear poets you would never hear otherwise and even to read at open mics there. Importantly online poetry allows people who cannot access in-the-flesh events because of where they live or because of disability to access a world they would be excluded from. Somewhere out there is a poet or poetry event organizer who sees the potential of this brave new digital world, who sees a new path for poetry.

I thought I might share with you some of the online poetry event organisers whose work I have enjoyed. I know there are some I have missed out and there are loads more I don't know about.  Please add any you know of in the comments or email them to me and I will add them to this post.

Other
The Poetry Book Society has events on its Instagram account: @poetrybooksociety
Helen Ivory and Martin Figura have launched Live from the Butchery:  https://www.facebook.com/Live-from-The-Butchery-100380041704407

Writing In the Time Of Covid 19 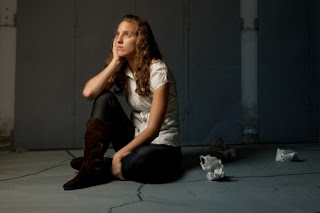 There is a Czech saying that my friend Hannah regularly quoted at me: "How to make God laugh - tell him your plans". My plans for this year were considerable. With my collection Owl Unbound due out this year, I had plans to build up my reputation at poetry readings, to network, to continue sending out to magazines, and of course to launch the book. God must have found them very amusing.

Even the sending out to magazines is becoming less easy as some print magazines are having problems with their printers. My publishers are having problems with their distributors. However online there is a surge in Zoom, Hangout and similar forms of internet events. I have enjoyed being a member of the audience at some of these. The Cheltenham Poetry Festival is organising a series of online workshops this summer and I am helping out with these.

And yet, online poetry for all its attactions, is not the same as being in a room with people. Technology (especially mine) has a habit of failing at the worst time. The connection falters and sometimes fails altogether, words are mangled, images of poets freeze. Nor is it possible to get the non-verbal feedback one gets when reading.

There has been a flurry of covid poems (some of them brilliant and some awful) and several covid anthologies are calling for poems, including one being produced by the Gloucestershire Poet Laureate, Z.D Dicks. Write Where We Are Now is an initiative by the Manchester Writing School and fronted by Carol Ann Duffy, creating online a living record of the crisis.

Pandemics have been a subject I have been interested in for decades. The threat and reality of the plague appears in my Healer's Shadow trilogy. And in my files I have an unfinished poem cycle about the impact of illness and environmental depredation on the collapse of the Roman Empire.

In the last month I have written two poems that might be termed covid poems. But as is usually the way with what I write they aren't a direct take on the subject. I am cautious about writing about covid now. Everything I write comes from somewhere in my brain where it has been brewing for a while. It is linked to my mental wellbeing.

Never has it been more the case that we write about what we must. For some people that is about virus, for others they need to write about anything but. The current anthologies can only capture a snapshot, and a valid one, but the best work on the subject may well be written in hindsight.
Posted by Zoe Brooks at 03:12 1 comment:

Hello and welcome to this the personal blog of Zoe Brooks, poet and writer. My collection Owl Unbound will be published by Indigo Dreams in 2020.

There are lots of ways of following this blog, me and my books. Check out the options below. I would love to hear from you. 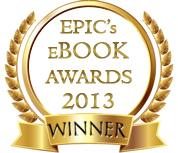 I welcome feedback about this blog or about my books.
Just email me at zoe.brooks@googlemail.com.